Do you remember the 2004 Halsey case that concluded parties could not be compelled by courts to take part in ADR? As of yesterday, the Civil Justice Council is taking a different stance. Their report on ‘Compulsory ADR’ published on Monday states that parties can in fact be compelled to mediate and that it is in many cases desirable and effective. Read the CMC’s press release in response to this controversial question. 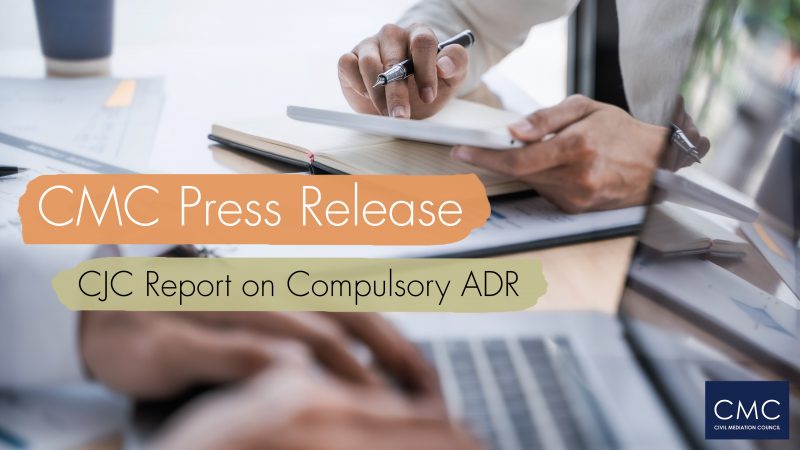 The Civil Mediation Council (CMC) welcomes the publication  of the Civil Justice Council’s report on ‘Compulsory ADR’. The Report released yesterday concludes that parties can be compelled to take part in mediation and that in many cases this could be desirable and effective.

“Clearly for the CMC, a charity which exists to promote greater use of mediation and other forms of ADR, this is a significant development. It is also a step further towards the CMC’s aim for Automatic Referral to Mediation to be the default means of dispute resolution in the civil justice system”, said Sir David Foskett, Chair of the CMC.

The Report comes nearly 20 years after the decision in Halsey where the court held that parties to a dispute could not be compelled to participate in ADR.  Since then, case law, practice and opinion has moved on and, as the Report concludes, it is likely that the answer to the question in Halsey would be answered differently today.  Indeed, as the Report recognises, compulsory ADR processes are already being used in several areas of civil justice and are proving successful and accepted.

“This is really good news. ADR is already an integral part of the justice system and is successful and accepted in family courts and employment tribunals.  We hope this development means that it will become more widely used across the judicial system saving a great deal of time and money for anyone in litigation”, added Henrietta Jackson-Stops, Chair of the CMC’s Government Liaison Working Group.

The report promotes the idea of ADR for free and lower cost cases however the CMC believes that with an 80% success rate it can save anyone involved in litigation a great deal of time and money.

A full copy of the CMC’s Response to the report can be found here.