When Illness is seen as a battle, what should a mediator do?

Is illness a battle? A fight ‘Me vs. the illness’ that can only be won or lost? Based on her own experiences as a cancer patient Jackie Elliman tries an approach that is based on her mediator’s toolkit – listening, reflecting and reframing a difficult situation. Her article reads like a guide for taking back control over a process that can make you feel utterless helpless at times. 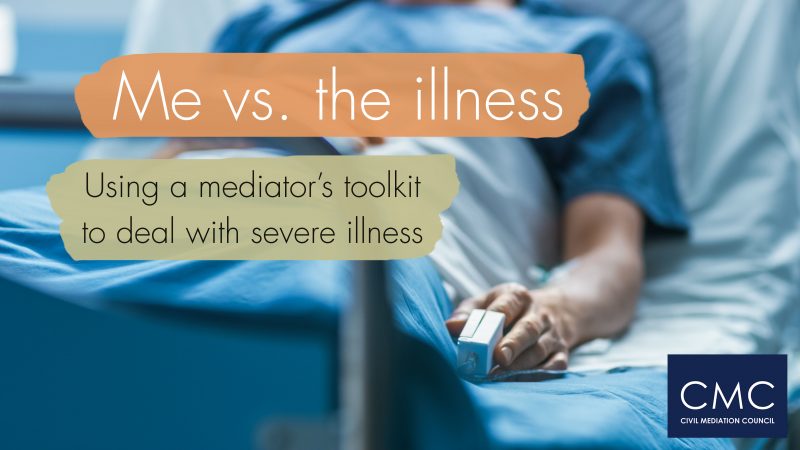 Some of you reading this will be familiar with the crystal clarity of thought that comes with steroid related insomnia. I experienced it in hospital after my dose was accidentally quadrupled. I found myself wide awake at 2 am, brooding on the frequent use of war as a metaphor for illness. In a vision loosely inspired by one of my favourite movies, the silent epic “Napoleon”, I saw a victorious Little General on horseback surveying the end of a battle to end all battles. The enemy has been wiped out, he’s won. There’s not much of anything left at all, in fact his own army has been pretty much devastated too but …..he’s definitely won.  At the moment of victory, however, a lone sniper – almost dead himself – crawls out from under the bodies and shoots our “victorious” General.

This led me to wonder how, as someone who defines herself as a mediator, I could move my own experience of ill health away from this win-lose metaphor? Could the processes and techniques a mediator uses to enable compromise resolution of disputes be applied in the “battle” against illness to create more realistic expectations and outcomes? Could we move towards trying to live the best possible life in the circumstances rather than winning or losing something? Some of the steps that are taken in mediation seem helpful to me, below is how I thought about applying them.

Finding out who the parties in the dispute are

Who is “Me”? For me, this involved thinking about the things I did that might have affected my health over the years. The wine bar evenings, late nights, occasional cigarettes and bad eating habits that may all have contributed to my body deciding enough was enough. In mediation, however, the mediator encourages the parties to look forward to new ways of living together, rather than back at the causes of trouble. So I tried to look at who I would become and learn from who I was; looking at elements like this to create foundations for a healthier future rather than to blame myself. Try and look back from a different angle too if you can to boost the spirits, I don’t spend much time in the past so if I found it a joyful surprise to do so for a while and realise just how many good times I had had over the years! Don’t stop there either, keep trying to find new stuff to do to help yourself too. I stumbled across the hospital gym by accident recently; I’m hoping to use it for all it’s worth to be fit for whatever the future may bring.

What is “my illness”?  I was dealing with cancer when I had these thoughts but I think they are applicable to many other illnesses, including the current pandemic. Long Covid sufferers and those getting over cancer have a lot in common. I reckon it’s important to know what you have, what stage it is at, how it might develop and most importantly, what these things mean. Clarity about what one has can help in learning to live in the present rather than constantly worrying about what the future may bring. But whilst knowledge is power too much can be scary. Pre-plan your questions and decide how much you need to know and when.

These techniques can provide a really useful framework for working with those who are trying to help us. A medical team will have a patient’s best interests at the heart of everything they do but they cannot possibly understand exactly what those are unless we help them. I started using the following guidelines, which really improved my relationship with my specialist. They enabled me to explain my viewpoint more clearly to the brilliant people who were trying to help me and mean that I get answers from them that I understand fully. This has built trust on both sides. My plan, which will be familiar to all mediators, was to: –

Listen more and to listen before I said anything.

Reflect back what I believed they had said to ensure that I had understood correctly.

Reframe what they had said if I felt there were other facets to a proposal that they had not gone into fully.

Reality check and challenge. For example, I asked an oncologist if they could actually eradicate cancer, as the battle-winning analogy does imply. The answer was a straight up “No”. Straight questioning is how I also learned that “all clear” means “no visible cancer”, not “no cancer at all”. A useful set of questions to reality check new treatment options is –
Does it work?
What are the risks?
Is it worth it?

Research. A mediator (unlike a Judge) does not need to read piles and files of evidence, but it helps if they have some understanding of the context of a case and the basics of the story. Which is a roundabout way of saying Google a bit….but Google carefully and sceptically. Forum sites can offer useful hints and tips but don’t get pulled into long exchanges about other peoples’ suffering, it will rarely relate to your own particular case and will quite likely cause unnecessary anxiety. At the other end of the spectrum, be equally careful about academic research papers, which can set your head spinning with statistics that may look scary but which probably do not mean what you think they do (remember there are “lies, damned lies and statistics”).  Maybe ask your medical team which sites they would recommend to help you understand issues that are everyday matters to them.

Really weigh up treatment options carefully, check and double check on what is available and what options like tweaking dosages may really mean. Consider the possible benefits versus the damage it may cause.

Based on an article originally published in The Cancer Hive

Jackie Elliman worked in the theatre and related industries all her life and later retrained as a lawyer. She is a qualified mediator and arbitrator with experience in commercial, community and workplace mediation. Particular areas of knowledge include the arts and cultural industries, employment law, intellectual property and charity/governance issues.

Jackie considers one of her biggest strengths to be the ability to make parties feel comfortable and give them a strong sense of their ownership of the mediation right from the start.