There are many questions about the idea of mandatory mediation which is currently in the public eye following the recent publication of the CJC report on ‘Compulsory ADR’. Mediator and CMC Director Terry Renouf reflects on the current discussion and the role of mediation: “There is much to discuss. We need to reflect on the fact that parties can and will get involved in disputes. It happens every day.” What are the challenges and what are the benefits? 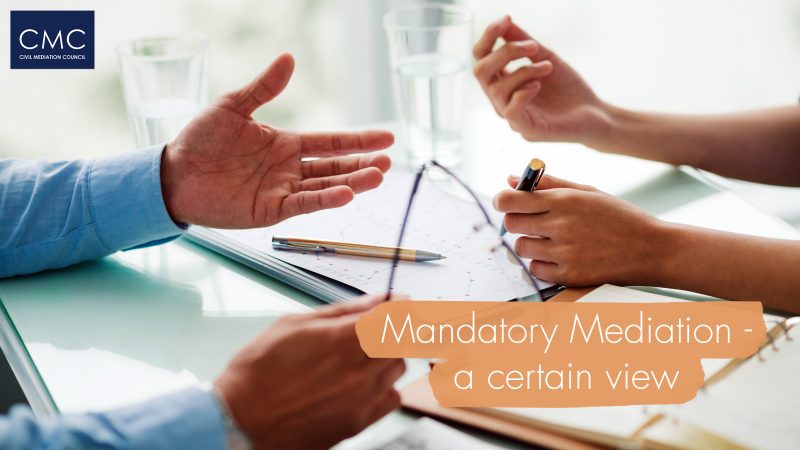 The Civil Justice Council recommendation [1] that Courts may order parties to mediate will come as no surprise to those familiar with the Court of Appeal decision in Lomax v Lomax [2]. In that case it was concluded that a Court had power to order parties to participate in a Judicial Early Neutral Evaluation, one of the many forms of Alternative Dispute Resolution available to disputants. In addition, those following the speeches of the Master of the Rolls will have noted that he suggests that “Alternative” should be dropped from the ADR nomenclature: Courts are there to assist parties to find a resolution to their dispute and (A)DR is to be viewed as part of that process – not an “opt in”.

Plainly the recommendations of the report are not as stark as suggested above. The conclusion is that the Courts may order mediation and that the Article 6 objection (that compulsion would prevent access to justice) raised obiter 17 years ago in Halsey [3] is not (and perhaps was not) good law.

Of course there were doubts about the Article 6 issue almost from the very outset and we will have to wait for an appropriate decision of the higher Court for a final determination but the direction of travel is clear and that itself is a reflection of a change in the Judicial view of the destination. At the time of Halsey the view was that the Courts provided a service that would adjudicate on those matters that were in dispute. The process would define the issues and the evidence needed to assist the Judge to determine the outcome. The parties could choose to explore settlement as they travelled along that path.

The view has now changed. The Courts provide a service for parties (dare I say “customers”) who have a dispute. It is recognised that parties desire a resolution of their dispute. It may be the case that an adjudication at Trial is that resolution but the Courts now take the view that they should facilitate and assist parties to find a settlement. In short there is now pro-active management towards resolution not adjudication. Some steps on the journey to mandatory (A)DR will need to be mapped out but the path is clear. In some cases mediation will be ordered. No doubt we will see a “pilot” for a year perhaps in a particular class of case (boundary and neighbour disputes as well as contentious probate matters are mentioned in the report) though it should be noted too that where “civil” now goes it is following many other Courts and Tribunals: workplace, family, small claims hearings in some County Courts; and international examples are cited in Italy, Ontario and Australia.

Other issues also arise which I will address in other blogs. What are the costs of mediation? What is the impact in “small claims”? Can the cost of mediaton be mitigated? Is the certainty offered by mandatory referral going to lead to reduced legal costs as parties no longer pursue interlocutory arguments? (The CJC report notes that “Procedural wrangling adds costs.”[4]) Will mediation take place at an earlier stage? Will “schemes”, such as that offered by the NHS Resolution, evolve and ease a parties path through the process and choice of mediator? What of the quality of mediator and regulation of mediation services [5]? Could one of the outcomes of mandatory mediation be that parties do not actively engage but merely turn up to “tick the box”? Will educating the public about ADR options mean earlier consideration of (A)DR mechanisms and better resolutions? Who should undertake any public education? Does AI offer any solutions? Is AI ADR?

There is much to discuss. We need to reflect on the fact that parties can and will get involved in disputes. It happens every day. It’s part of daily life and common-sense means that the vast majority are quickly resolved. A few litigate and the majority of those cases settle through direct negotiation, “without prejudice” or Part 36 offers. A few might then mediate (with the vast majority of those finding a resolution and often, I would argue, a “better” resolution). In considering the CJC recommendation on Mandatory Mediation I encourage readers to have regard to those issues. Mediation is always a choice as parties can seek their own settlements before any mandatory ADR. In reflecting on the issue of compulsion (and responding in time to other consultations that will follow) I suggest that readers reflect on the benefits that arise not only from the certainty of process but also the certainty that an early resolution through mediation offers to litigants who are your clients and the “customers” of the Court service.

We use information collected through cookies and similar technologies to improve your experience on our site, analyse how you use it and for marketing purposes.
Privacy Policy

We and our partners use information collected through cookies and similar technologies to improve your experience on our site, analyse how you use it and for marketing purposes. Because we respect your right to privacy, you can choose not to allow some types of cookies. However, blocking some types of cookies may impact your experience of the site and the services we are able to offer. In some cases, data obtained from cookies is shared with third parties for analytics or marketing reasons. You can exercise your right to opt-out of that sharing at any time by disabling cookies.
Privacy Policy
Allow all

Always ON
These cookies and scripts are necessary for the website to function and cannot be switched off. Theyare usually only set in response to actions made by you which amount to a request for services, suchas setting your privacy preferences, logging in or filling in forms. You can set your browser to block oralert you about these cookies, but some parts of the site will not then work. These cookies do notstore any personally identifiable information.

These cookies and scripts may be set through our site by external video hosting services likeYouTube or Vimeo. They may be used to deliver video content on our website. It’s possible for the video provider to build a profile of your interests and show you relevant adverts on this or other websites. They do not store directly personal information, but are based on uniquely identifying your browser and internet device. If you do not allow these cookies or scripts it is possible that embedded video will not function as expected.

These cookies and scripts may be set through our site by our advertising partners. They may be used by those companies to build a profile of your interests and show you relevant adverts on other sites. They do not store directly personal information, but are based on uniquely identifying your browser and internet device. If you do not allow these cookies and scripts, you will experience less targeted advertising.
Confirm my choices Allow all
Verified by ConsentMagic